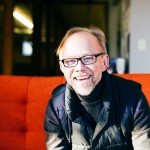 Davis Communications founder Ted Davis sat down to talk about doing well by doing good with Don Ball of the CoCo.

If you’re a denizen of St. Paul, then you might recognize Ted Davis, as he is often seen trundling along the city sidewalks, on his way from one meeting to another. (If you hang out at CoCo St. Paul, then there’s a good chance you know Ted, who is one of the first CoCo members.) Ted is a fixture in St. Paul. He’s a known quantity in the Capitol, City Hall and other places of power—not because he participates in high-handed politics or anything like that—but because he works in the city on causes he cares about.

Davis Communications Management is a public relations, public affairs and communications consulting firm based in Saint Paul, Minnesota. We help clients build the partnerships they need to achieve their goals. We connect companies, organizations and individuals with the people who are vital to their success.